Did you know that you can boil a frog alive, without it trying to escape? I’m not saying you’d want to, but here’s the point… The old saying goes, if you throw a frog directly into boiling water, it will immediately jump back out. However, if you place the frog in cold water and slowly heat it up, the frog will boil to death. At least that’s what an experiment showed back in the 19th 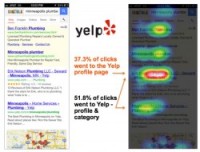 The Power of Online Reviews

Many customers ask us if reviews on Google, Yelp or Yell really work. And we always answer them YES - online reviews work. They work and make your phone ring more often. I found an interesting article on Aaron Weiche Blog about power of Yelp Directory and how users interact with mobile search results & how pages with Yelp results are attracting the clicks.  Business profile pages, especially the results that appear with Reviews in the SERP thanks